The Wildlife Group is hoping to use its National Lottery Community Fund award to support seasonal events throughout the year in the village. Please check back here for details of the next event.

The village Wassail was held at the Community Woodland at White Street Sports Ground on Friday 17 January, starting with a lantern procession from the village school. The evening was a celebration of apples, orchards and the New Year with food, drink, songs and festivities, and music from North Curry Village Band.

Thanks to the Willow and Wetlands Centre for making lanterns with the school, and Withies Delicatessen for the food.

The Wildlife Group arranged for about 60 pupils from North Curry Primary School to visit the Community Woodland. Luckily, no rain arrived and two hours were spent walking around the woodland in three groups talking about its wildlife. Tony Hoskin focused on birds, Jane covered bugs, bees and butterflies, while Phil talked about trees, shrubs and the management of the site for wildlife. The children seemed to enjoy it and asked lots of questions, while the teachers and parents also seemed happy. Lots of them didn’t know that the woodland existed, so one of our aims was achieved.

Tony and Phil then spent another hour and a half at the school with the same group of children looking at the North Curry Wildlife website projected onto a big screen. Tony showed many of the bird photos he has taken around the village in the past year which gave rise to many more questions.

Apple Day was a great success with over a hundred residents and friends gathering at White Street pavilion to celebrate. A range of 20 different apple varieties were on display for people to taste, there was home-made apple cake to try, and face painting and leaf printing on T-shirts, while apple-themed music was played by a group of local musicians, led by Tim Hill. Apple-pressing demonstrations were carried out using Climate Change Athelney’s press, and apple juice could be sampled by all. With thanks to Kathryn and Brian Jeanes and Caroline Vaughan.

Tours of the nearby Community Woodland and orchard were led by Phil Stone who described the range of experimental habitats being created for wildlife, including hazel coppice, bug hotels, a pond, and bee and butterfly banks.

The event was supported by an award from the National Lottery Community Fund.

The Wildlife Group joined in this lovely celebration of plants and flowers with an arrangement of native trees, shrubs and plants in  the  lych gate based on The Wind in the Willows by Kenneth Grahame. Liz Gibbs painted the characters of Toad, Ratty, Mole and Badger, and we were very grateful to David Birch for making a magnificent boat for Ratty.

On 18 June, four classes gathered in the school hall to hear Chris Sperring of the Hawk and Owl Trust give a presentation about owls and hawks, a subject on which he is an expert , having been interested in birds since he was just a few years old.

The children were particularly fascinated by Chris’s ability to imitate many different owl noises as well as other birds’ songs. Pictures of many types of owl were shown and stories of their habits and sightings in various locations were told.

Chris asked many questions to find out what the children knew and the responses he got were enthusiastic. Asked how many had seen a Barn Owl, the hands shot up of about 75 percent of those present – an indication that this comparatively rare species is alive and well around North Curry.

Question time after the presentation was a lively affair with more than half of the children wanting to ask something. There were so many questions that those wanting to ask more than one question could not all be answered as time was running out.

Tim Spotswood of the North Curry Wildlife Group thanked Chris Sperring for giving such an enthusiastic talk. The visit was sponsored by the Wildlife Group using our National Lottery Community Fund award, and we hope to encourage the school to take a continuing interest in wildlife by providing such things as bird boxes around the school grounds.

We were pleased to see so many people at our stall at the May Fair who were interested in wildlife and were doing good things in their own gardens. Children joined in our game of identifying wild plants, trees and animals and earned a packet of free cornfield annual seeds to sow in their gardens. We hope there will be patches of wild flowers for pollinators in many North Curry gardens this summer as a result.

A tank of tadpoles proved a talking point about the benefits of a garden pond and we had suggestions for garden nectar plants to attract bees and butterflies as well as looking lovely in your garden. Butterfly Conservation’s top five summer nectar plants are: Buddleia spp., Lavender (Lavandula spp.), Verbena bonariensis, Perennial Wallflower Erysimum ‘Bowles Mauve’ and Marjoram (Origanum spp.). Give these a try if they are not in your garden already or make room for a few more plants to treat your butterflies and bees!

A Village Wassail was held on Friday 25 January 2019 as a celebration of apples, orchards and the New Year. The event started at 6pm with songs at North Curry School, followed by a procession to White Street Sports Ground with music and lanterns. Hot soup and drinks were available at the pavilion while North Curry Village band played, and then the assembled company processed to the orchard at the far end of the Community Woodland where the apple trees were dressed with ribbons and fairy lights. There were more songs, traditional noise-making and shouting to scare away evil spirits and the toasting of the apple trees.

About a hundred people were involved over the evening, with many children attending. Many thanks go to Tim, Amy and Sasha for organising the event which was supported by an award from the National Lottery Community Fund.

Members of the Wildlife Group were pleased to welcome many May Fair-goers to their stall at the 2018 North Curry May Fair. Our aim was to encourage people to think more about gardening for wildlife and we had flyers to give out and information on display about how to encourage more wildlife into your garden, as well as actual examples of trees, plants and shrubs that are wildlife friendly.

We were very pleased that so many people expressed an interest in gardening for the benefit of wildlife and wanted to know more.

In conjunction with Transition Athelney, the Wildlife Group hosted an event in the afternoon of Saturday 16 September to celebrate the creation of the Community Woodland in 2009. It was a family-friendly event, featuring a quiz and activities for children, and included the building of an ‘insect hotel’ from recycled materials.

It was lovely to meet and talk to so many people who are interested in the wildlife of the village and had come to see the work taking place for the new pond and butterfly bank. We look forward to hosting further events and hope to attract more children in the future.

We mounted a display in the Post Office window to remind people about all the wonderful wildlife at the Community Woodland at White Street Sports Ground and hopefully to inspire them to do something to help wildlife in their own gardens. We had hoped to exhibit the new barn owl box that we had just acquired before it went up in the ash tree at the woodland, but it was too large to go in the window. Luckily, David and Denise Walker offered to have it temporarily on display in their front garden in the Square. We are very grateful to those who donated towards the cost of this box. 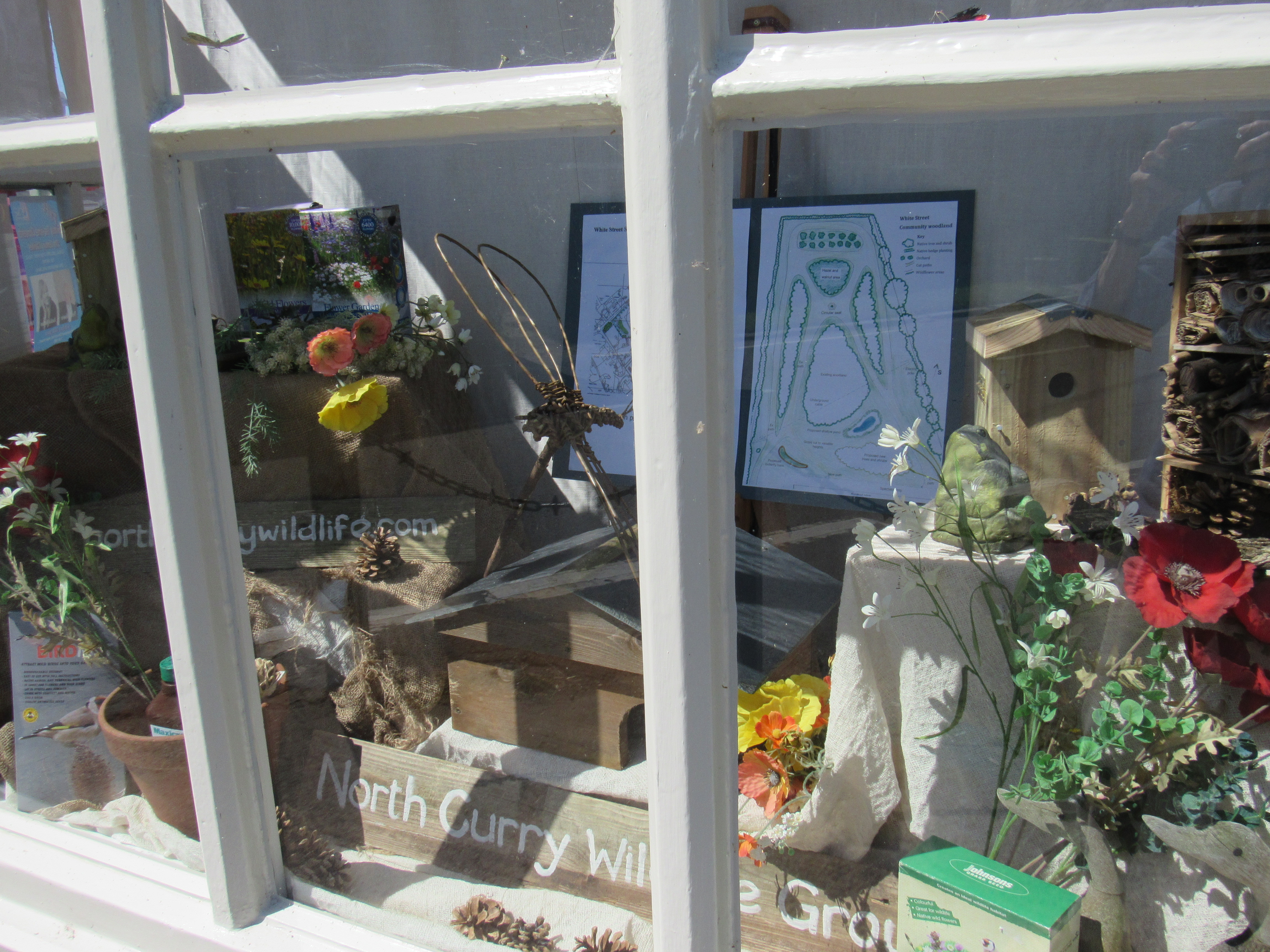 The Community Woodland at White Street was represented at this festival by a natural display of native trees, shrubs and flowers which filled the centre of the church.  This, and the recording of native birdsong that was played throughout the festival, made it feel as if the natural world had come inside the church.