We have received a report from Dave Patten that he saw a mink on Moor Lane 100 yards from the entrance to Lawnmoor Farm. This is the only report of mink we have had, though Dave tells us he saw one many years ago in the same spot.

According to the Mammal Society, mink are an invasive, non-native species which have colonised Great Britain and Ireland after escaping or being released from fur farms where they were originally brought from North America.

American mink are generally found along rivers and in coastal areas. They have dark brown fur, which can look black when wet, and a short, fluffy tail. They are smaller than otters.

Thanks to Dave Patten for notifying us of a surprise sighting of two porpoises in the Tone on 15 April 2020, and for sending us a link to the video footage he took of them swimming near New Bridge. He was walking his dogs along the Tone when he caught sight of the porpoises in the water and rushed home for his video camera: https://youtu.be/4ddy827dcpw

The Harbour Porpoise, which is the only porpoise in European waters, is generally found in shallow waters around the UK and can be seen in estuaries, sometimes exploring rivers, as in this case. They are dark grey, with a lighter colour underneath. They have a rounded face and no ‘beak’.

This sighting occurred during the coronavirus lockdown, so it is possible that a reduction in human activity encouraged the porpoises to explore further than is usual. However, residents with families who have lived in the area for many years have said that it was not unusual for porpoises to be seen in the river in the past as they would come up the river in search of eels, so perhaps this sighting may indicate that the eel population is doing better at the moment.

Mammals at the Community Woodland

Mammals are not frequently seen at the Community Woodland, but there is a badger sett on the eastern side of the site so we know that badgers are present and other mammals are occasionally seen or leave evidence of their presence.

We know from rabbit droppings and digging that rabbits visit the Community Woodland and they are occasionally seen in and around the woodland and sports fields. 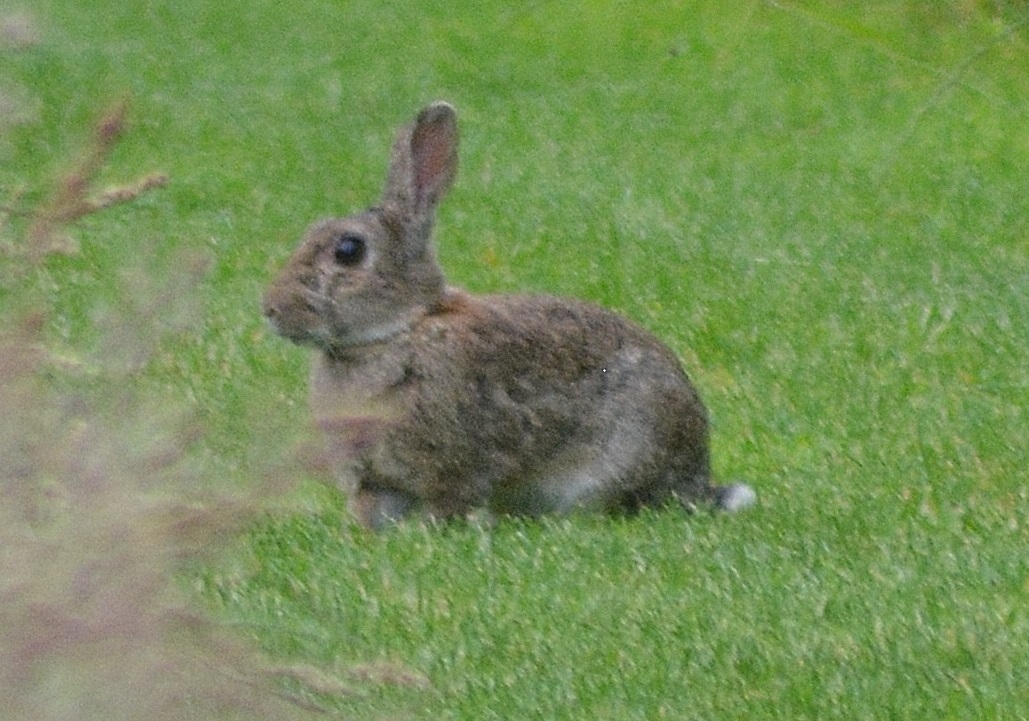 Rabbit taken on the edge of the sports field, June 2019 (photo Tony Hoskin)

We also have evidence of visits by deer, both in footprints in the mud and in occasional rubbing and nibbling damage to trees.

Roe Deer can occasionally be seen on North Curry Moor or at Helland. These two Roe bucks were seen in March 2019 at Helland. Their antlers are still covered in what is known as ‘velvet’ which they rub off on small trees and shrubs. This ‘brashing’, as it is known, can be a problem in young tree plantations which is why tree guards are often used.

Grey squirrels have occasionally been seen at the woodland but are more often seen in the churchyard or in the nearby trees along the Fosse (see banner picture).

Squirrels are most often seen at the woodland in autumn where they take hazelnuts. Three different individuals were seen at one time in September 2019, undoubtedly feeding on the abundant hazelnut crop.

Bats have been spotted at dusk flying around the Community Woodland site. We hope they will roost in our bat boxes.

In the winter months, when we put out seed and fat balls to feed the birds, Field Mice were discovered to have nibbled their way into the bird seed store. We also have evidence of voles on site. 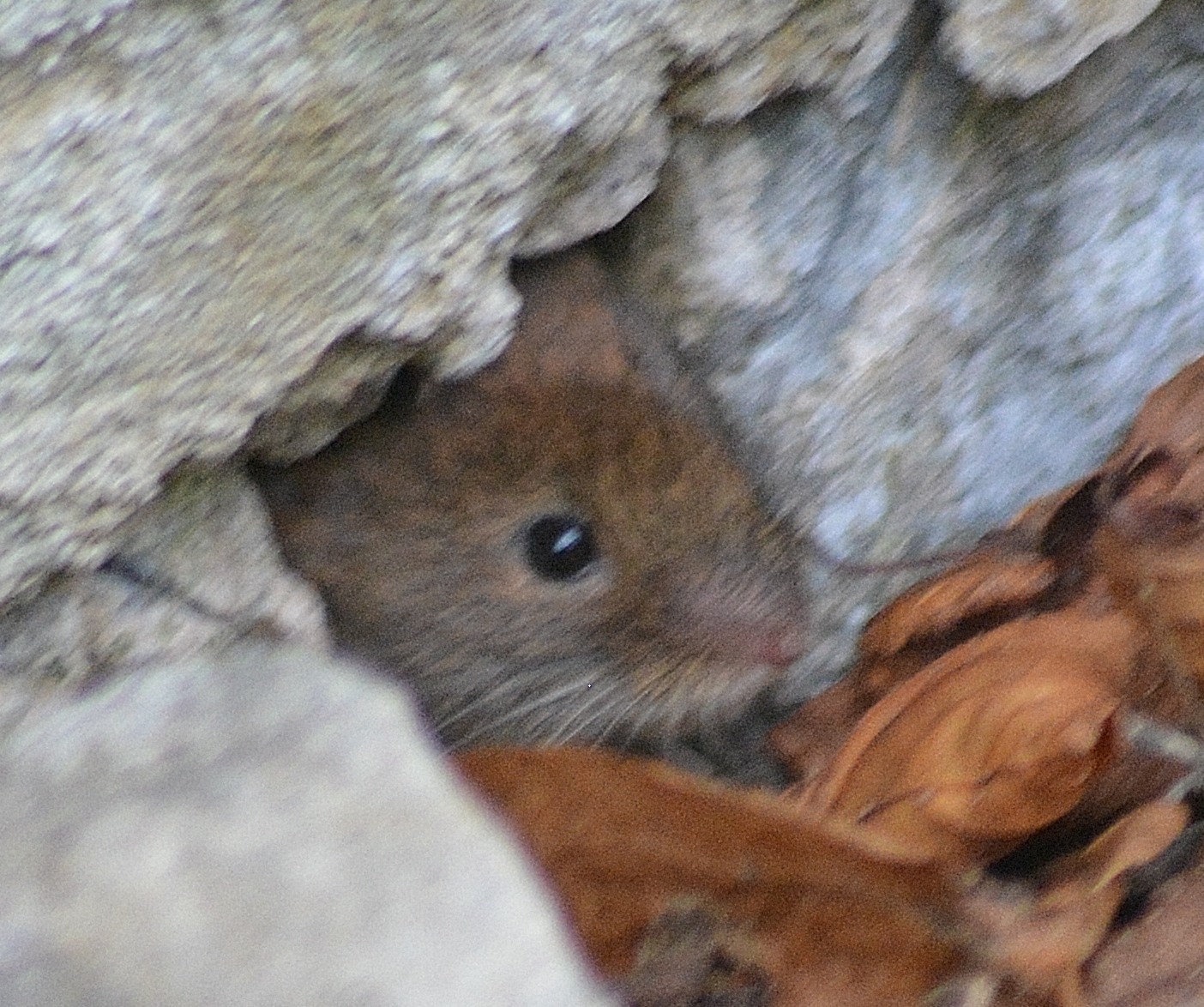 This picture was taken in October 2019 and is probably a vole running in and out of a hole in the churchyard wall (photo Tony Hoskin).  It can be hard to distinguish between mice and voles, and a good guide by the Woodland Trust to the differences between them (as well as shrews) can be found at: https://www.woodlandtrust.org.uk/blog/2019/01/types-of-uk-mice/

Voles are common and widespread, living on grassland, moors and heaths and are active by day and night, feeding on seeds, roots and leaves. Field Mice live in woodlands, grasslands and gardens. They mainly eat tree seeds but will also eat snails, nuts, fruit and berries and can store these in underground burrows.

Nut shells can be a clue to which animals have been feeding. Squirrels generally split a hazelnut shell completely in half, whereas round holes in the shells indicate that mice, voles or dormice have been feeding. Dormice leave a smooth round hole, whereas Field Mice and voles leave tooth marks around the cut edge and mice can make irregular as well as round holes. Great Spotted Woodpeckers also eat hazelnuts, but tend to break the nut into pieces or leave large irregular holes. 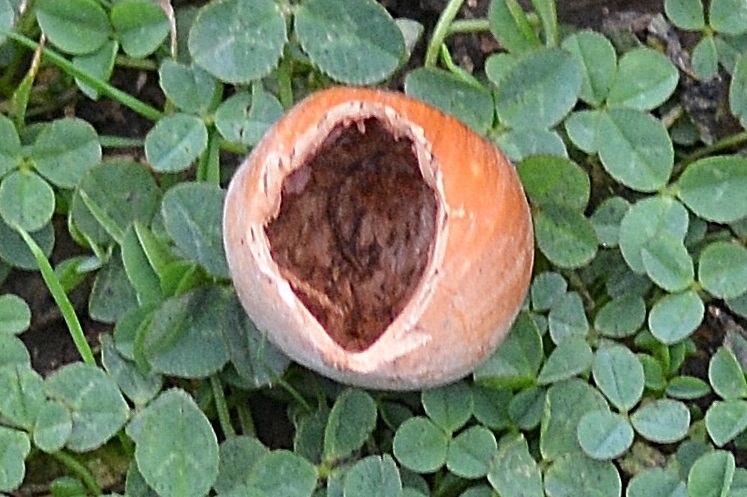 Do let us know if you see any mammals at the Community Woodland or evidence of their activity.