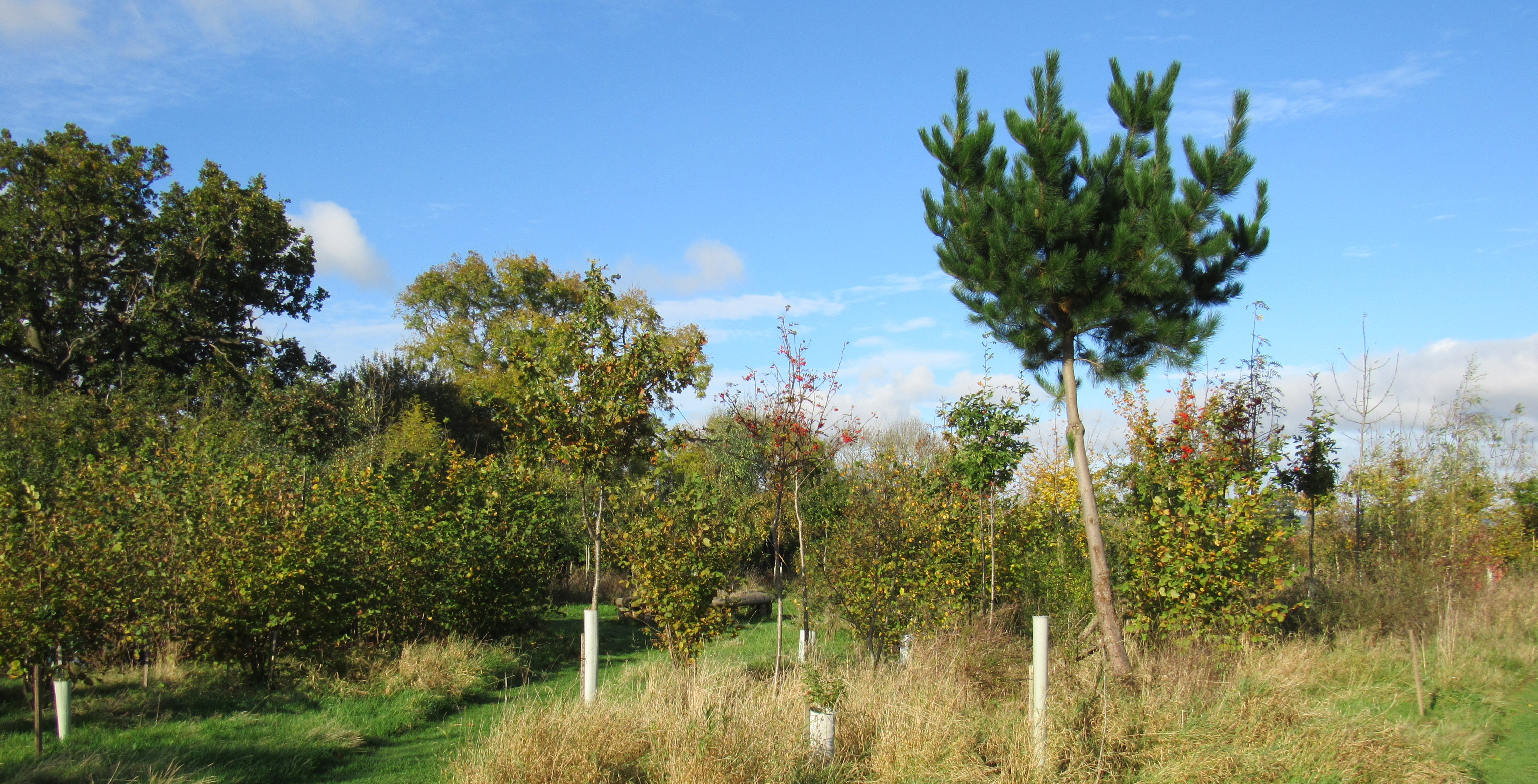 This is an area of about an acre in the far corner of White Street Sports Field beyond the main football pitch. It was sown with a meadow mix of grasses and wild flower species and planted by volunteers in the spring of 2009 with about 25 species of native trees and shrubs. It also contains a small orchard with apple, pear and plum varieties and an area of hazel and walnut trees. The site is bordered by both mature and newly planted hedges and by some mature trees.

The grass is allowed to grow beneath the trees for the benefit of insects and other wildlife, but paths are cut through the site to make it easy for walkers to visit. In addition to the grasses, there are flowering plants to enjoy, including Cowslips, Red Campion and Lady’s Smock in spring, and Ragged Robin, Knapweed, Bird’s-foot Trefoil and Betony in summer, which attract bees, butterflies, dragonflies and other insects.

We are very lucky to have both a large oak and a large ash tree on the western boundary. These are home to two large boxes suitable for owls, each of which has been used by a Barn Owl in the past two years. There are other bird boxes and a bat box in other trees around the site, including a ‘terrace’ of three boxes suitable for Sparrows.

The woodland is home to many birds, including Blackcaps, Robins, Chaffinches, Blackbirds, Dunnock, Reed Buntings, Wood Pigeons, Blue, Great and Long-tailed Tits. In the summer, various warblers such as the Chiffchaff use the area to breed. Other birds, such as a Sparrowhawk or Green and Great Spotted Woodpecker, can be seen or heard. Many of the nest boxes you will see around the site have had residents, either roosting or breeding, and as the trees mature more birds will find the woodland a safe haven in which to raise their young.

At the centre of the site is a circular seat, a good place to sit and watch any birds coming to the nearby bird feeders in winter. Three other structures have been built to provide shelter for invertebrates or small mammals. These ‘insect hotels’ are made of pallets and stuffed with twigs, sticks, rolled-up cardboard, straw and anything else that will provide nooks and crannies into which insects can crawl for shelter. We have also begun a living willow arch over one of the pathways and a willow tunnel for children in the hazel grove.

We know mammals use the woodland as they leave footprints or droppings but we rarely see them. There is a badger sett on site and we know that deer and rabbits visit and have seen mice and voles. Underneath one of the insect hotels is a specially built area for hedgehogs to shelter though none has been seen as yet.

In 2017, the extension of the car park gave us an opportunity to develop some further habitat for wildlife between the woodland and the senior football pitch, using the spoil from the car park excavation. Part of this landscaping is a south-facing slope on which we have sown wild flowers for butterflies and other pollinating insects.

We have also included a shallow pond to add to the diversity of the environment, and a bank on which we have planted a variety of small trees and shrubs. A smaller bank next to the pond, known as the ‘bee bank’, was sown with flowering plants in 2019. Information for visitors about the wildlife of the woodland can be found on a board kindly designed and illustrated by Kate Mears and situated in the north-west corner of the site (see Projects section of the website).

This is a great place to walk dogs, but please keep dogs on leads and away from the playing areas of the sports field, particularly as the site is used by many children. The ideal route for dog walking is around the edge of the site. Please take any dog mess home or put it in the bin provided.