While some of the original species have been crowded out by the grasses or more dominant species, other species have arrived by themselves. Common knapweed is one species that has done very well and butterflies and bees enjoy its nectar in the summer.

Text and photos by Liz Gibbs

List of flowering plants recorded at the woodland in July 2020: 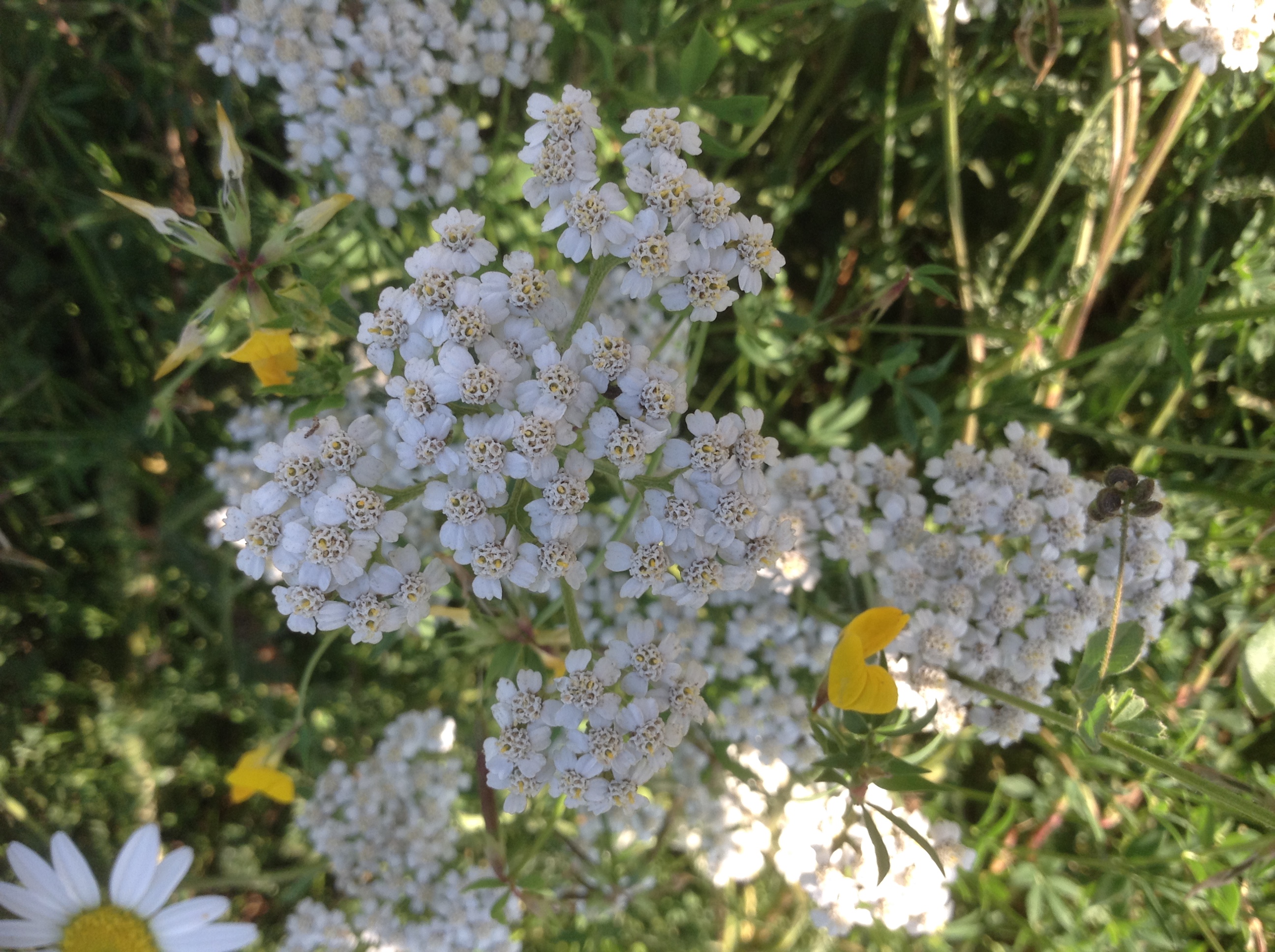 List of flowering plants recorded at the woodland in June 2020: 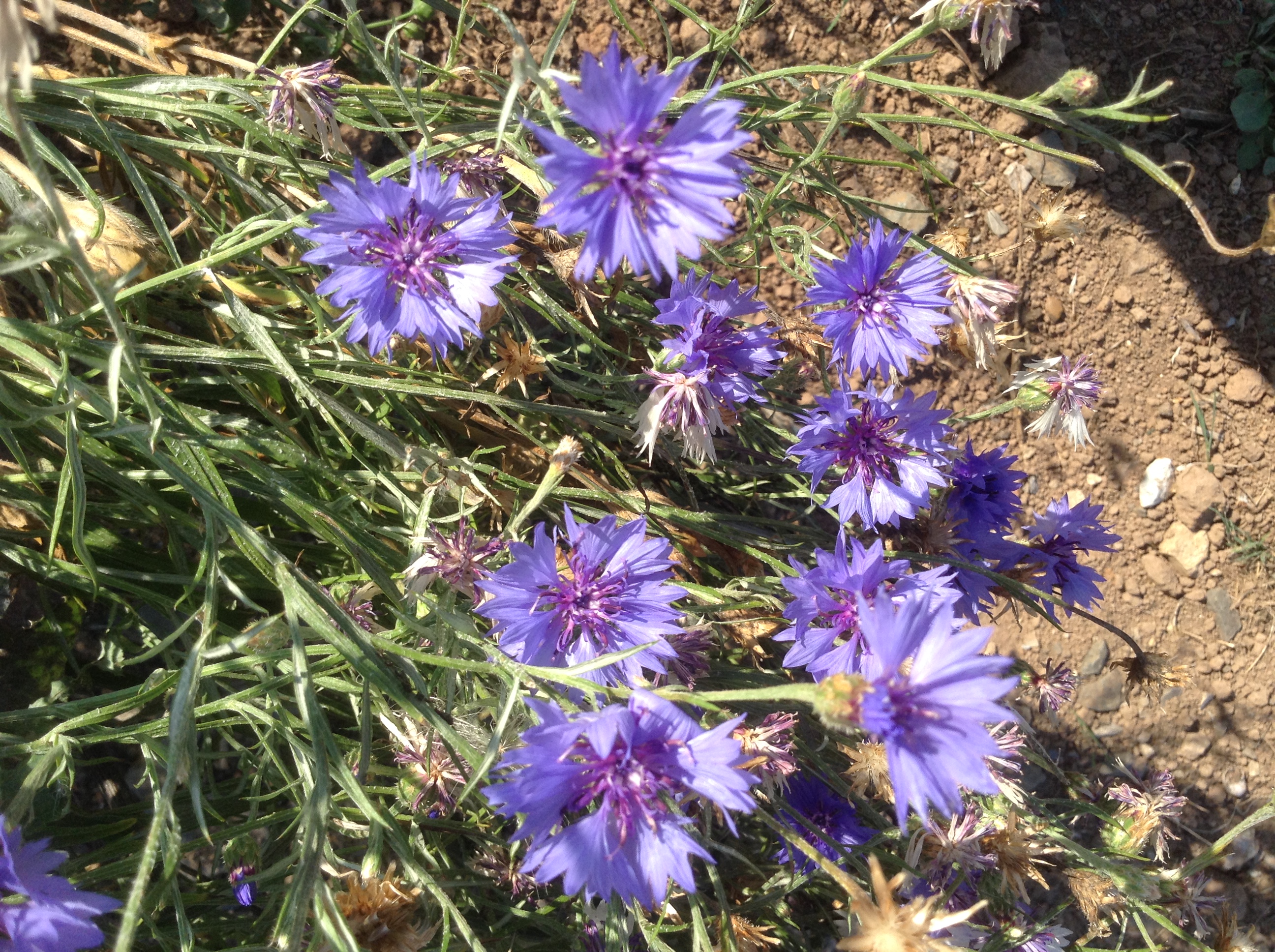 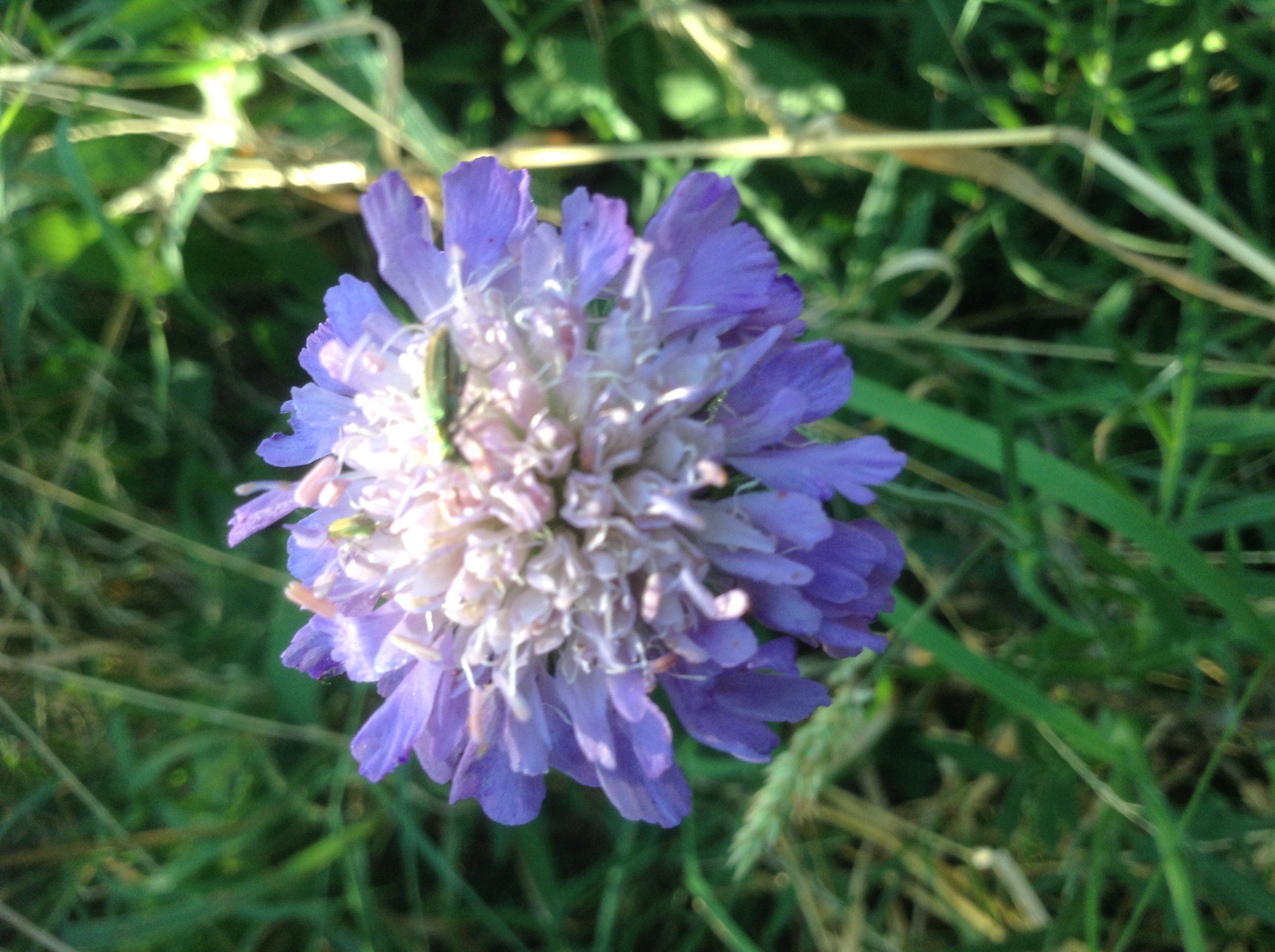 A Posy of Geraniums

The flowers are the most noticeable aspect of this group of plants at this time of year and all are to be found in the Community Woodland. It is worth looking later in the summer to see the dainty seed capsules that look like bird’s beaks; hence the common name of Stork’s-bill for Geranium pratense. These ‘beaks’ split open and fling the seeds widely, a very effective seed-dispersal mechanism!

Although generally very common, this beautiful blue flower has just started to appear in the Community Woodland.

The large blue flowers have five petals with faint veins on them. They can grow to a large clump of up to a metre tall and will tolerate a good deal of shade.

They have been used in cultivation to provide many different attractive varieties and are rightly popular with gardeners, and with bees!

The Robert that this pretty plant has been named after was a French abbot and herbalist in the eleventh century. He used it for cures ranging from diarrhoea to toothache! If you rub yourself with the leaves it is said to repel mosquitoes.

It has a bright pink flower and the stems are red; also the leaves by the end of its flowering period. It is very common on waste ground and it seeds readily.

The flowers of this geranium are tiny and purple pink. The most distinctive thing about it are the beautifully shaped leaves, with divisions so deep they almost reach the base of the leaf. The plant is rich in tannin and, if you could ever collect enough, a brown dye can be made from the flowers.

In the Pond Area

This is a marginal water plant which can cope with fluctuating water levels. The leaves are lance shaped and the flowers a showy purple which are attractive to bees.

After seeds form, the stem sinks below water level and the seeds disperse in the pond. It can also spread very efficiently by branching rhizomes.

You can roast the seeds and eat them like nuts or cook the leafstalks, but probably best to leave them to deer who apparently are very fond of them!

These common but showy plants grow happily along local rhynes such as on Moor Lane.

If you look very closely, the tiny flowers are from the Rosaceae family and smell sweet. Maybe this is why they were used to strew in churches for weddings and festivals. Queen Elizabeth I was particularly fond of them on her bedroom floor!

This is very like the Creeping buttercup in the same family which is so common in fields and hedgerows, but this one likes damp or wet places and will even thrive in open water.

It is widespread with pretty yellow flowers and is poisonous!

This plant is from the Lithraceae family, not the Primulaceae like the other loosestrifes. It has beautiful bright magenta-purple flowers and looks stunning in numbers along watersides and in bogs and marshes.

It is a food plant for many beetles, weevils and caterpillars but seems to do very well despite this!

It has become a pest in the USA and New Zealand as it crowds out other species. However, it is so attractive that it’s possible to buy some forms with an AGM (Award of Garden Merit) from the RHS!

Musk Mallow is an ornamental plant which thrives on dry soil but it seems very happy by the pond!

Cultivated forms are available for gardens too. The seeds, leaves and flowers are all edible in salads. It has been discovered that the root can help control blood sugar levels.

This thistle is a big, energetic plant with beautiful purple flowers. It can grow to 1.5 metres and the deep tap root makes it a difficult plant to remove if you find it in the garden. However, it is in the top ten of the best nectar producers so well worth growing!

List of flowering plants recorded at the woodland in April 2020:

Often abused for their tendency to spoil lawns, they are one of the earliest pollen flowers in spring. Any gardener will tell you that unless you remove their long tap root they will regrow.

They get their name from the French dent de lion as the leaves were thought to resemble a lion’s tooth. All their parts are edible – the leaves are like spinach! The seeds spread by means of their tiny parachutes to any rough soil.

Although only mildly toxic to humans, the Celandine is sufficiently toxic to grazing livestock that in the US it is listed as a ‘noxious weed’ and must be got rid of!

Below the plant are tiny round tubers which will break off and start a new plant so they are difficult to eradicate.

However, the shiny bright glow of the flowers is a pleasure!

This tall plant of woodland paths and hedgerows has appeared this year (2020) beside the path through the Copse.

It bears little relationship to the Lesser Celandine apart from its bright yellow flowers, and it is in a different flower family altogether. It belongs with the poppies as it has only four petals. When you see its seed capsule that forms after the petals drop, you will see they are very poppy-like too.

Ants are attracted to the white appendage on the seeds and carry them away, thus helping the distribution of the plant. It used to be called Swallow Wort as it timed its flowering with the arrival of the Swallows … spot on time this year!

This is the very pretty wild relative of the onion and it flourishes in moist woodland which is why the Copse provides it with a good home.

It has long, strap-like, pointed leaves followed by umbels of white starry flowers. All parts of the plant are edible and are mildly garlic flavoured.

It is reckoned to be the sign of an ancient woodland and a good spring tonic!

This tall, common hedgerow plant understandably had the old British name of Jack-by-the-hedge.

It can grow over a metre tall and has a cluster of small, white, cross-shaped flowers which puts it in the Cruciferae family.

The plant was used as far back as 4000 BC as a spice, and if you crush or taste the leaves they are mildly garlicky and can be used in salads.

List of flowering plants recorded at the woodland in March 2020:

These are common, although not as common as they were, and are present at the Community Woodland.

Understandably, they are also called Star of Bethlehem or Snapdragon because if you are there at just the right moment you can actually hear the seeds popping!

It was once gathered to make an infusion, a bit like tea, to take if you have a stitch in your side.

On the other hand, there was the belief that people who picked the flowers might be led away by pixies, so beware!

This is a much-loved perennial in the primrose family. The name may come from the Old English for cow dung as it was in cow pastures that they were often found.

It used to be a common wildflower but since the changes in agricultural practices in the 1970s and 1980s, it is becoming rarer.

We have several small but increasing clumps at the woodland.

Cowslip seeds are sometimes included in wild flower mixes used on motorway banks or in civil engineering projects. A lovely local example is along the A358 near Hatch Beauchamp where the banks are simply covered in cowslips!