We have built three ‘insect hotels’ or shelters at the Community Woodland, using pallets donated by various people from building sites around the village, and roofed them with old wooden garden screens covered with left-over roofing felt. We left a gap to allow a small amount of rain in as we wanted them to be sheltered, but not too dry. This is based on guesswork rather than research, but we will be monitoring how they fare.

The first hotel was built near the 'butterfly bank' at the front of the woodland to test out the construction, and then a second was built during the Woodland Celebration afternoon of 16 September 2017 in the orchard area at the far end of the woodland. A third shelter was later put up in the hazel grove, though this is less visible in the summer when the hazels are in leaf.

The hotels are stuffed with various objects to give insects small spaces to crawl into and shelter, such as rolled-up corrugated cardboard, bricks with holes in them, hay and straw, bamboo canes – preferably hollow – and other twigs and sticks. In the summer, solitary bees use places such as the inside of bamboo canes to lay their eggs and then stuff the holes with mud or leaves to keep their young safe until they hatch.

Materials for the hotel in the orchard area (left) and the finished construction (right) showing space created  at the bottom with hedgehogs in mind. 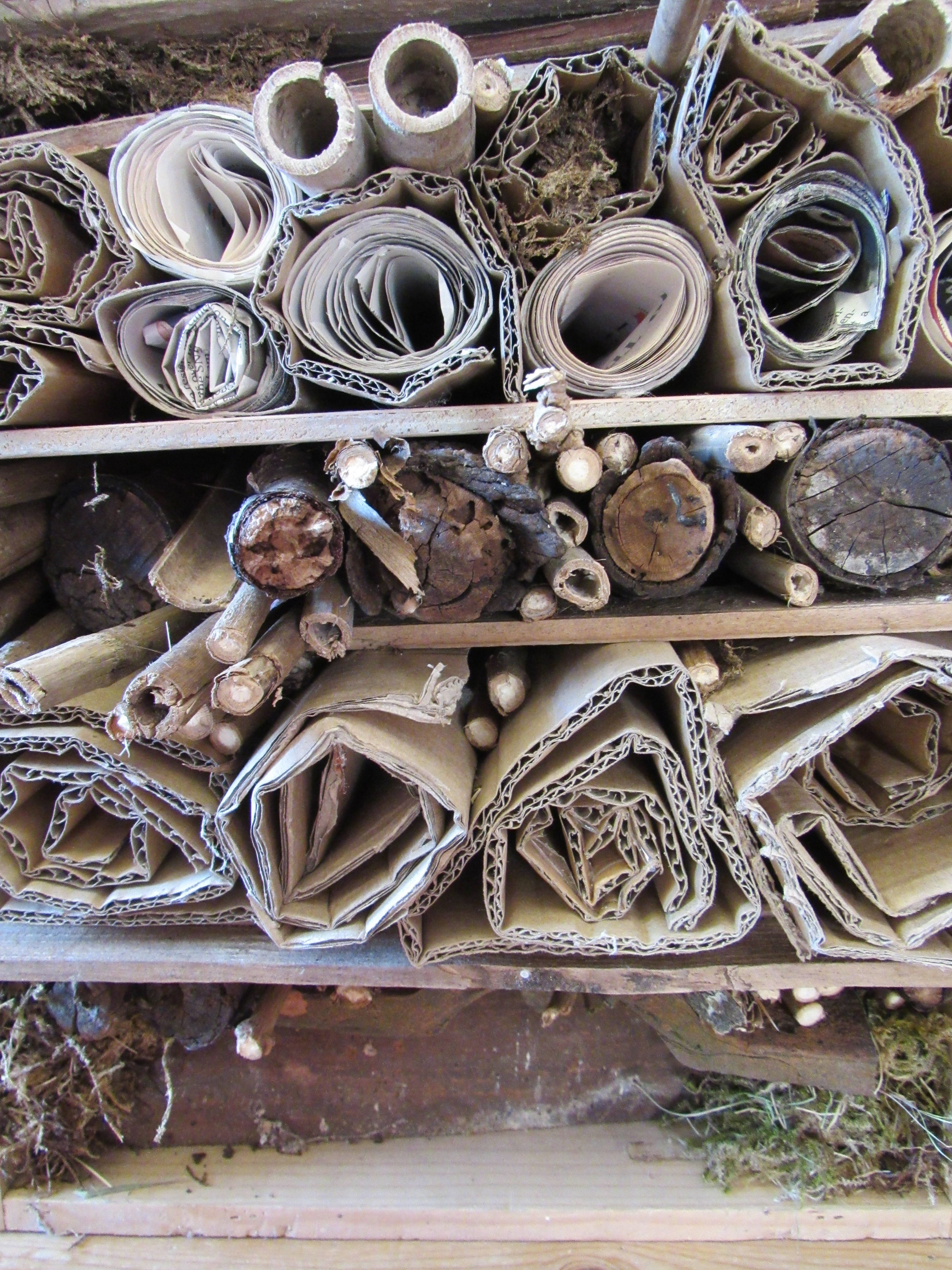 If you have any of these sorts of materials, you can create a mini version in your own garden to be a place of shelter for insects.

The creatures that will use these shelters will largely be invertebrates, such as bees and wasps (many of them don’t live in hives), ladybirds, lacewings, beetles, woodlice, slugs and snails.

Wasps get a rather bad press but are essential pollinators. They also eat a lot of garden pests such as flies and aphids, while they themselves can be food for badgers, frogs, birds, dragonflies, bats and honey buzzards.

The insect hotel at the front of the woodland now has a smart roof of pollarded willow.

A Peacock butterfly was observed flying in and out of the red insect hotel at the top of the woodland in October 2019. We think it may have been inspecting it as a possible overwintering site and hope it found a warm, dry shelter there for the winter.

We now have a fourth shelter, this time situated in the corner near the Copse, which has an underground chamber about 30 cm deep incorporated beneath it. This is accessed via pipes and filled with elm branches, wood chippings and leaves. We hope that slow-worms or other creatures will find shelter in this ‘basement’. The corrugated iron outside has been provided for basking.